ERA Testimonies in Opposition of HF13 (PDF)
Testimonies submitted to legislative committee in opposition of the “ERA” billSF919 identical to the Democrat constitutional amendment except that it adds, “Nothing in this article shall be construed to grant, secure, or deny any right relating to abortion or the funding thereof.”

“Equality under the law shall not be abridged or denied on account of gender.”

Rep. Mary Kunesh-Podien, author of the “ERA” amendment in her own words:

Asked for the definition of the word gender, Rep. Kunesh-Podien acknowledged there is no legal definition.

“My working definition for gender is a reflection of who you see yourself as, whether it’s male, female, trans, whatever it is, that’s who you are, that’s how you identify yourself as gender.”

Asked if she would consider amending the bill to replace the word “gender” with “sex” to remove any ambiguity about the meaning of this constitutional amendment, Rep. Kunesh-Podien said “NO.”

Changing the Minnesota Constitution to enforce gender identity ideology on our children and on our land is both revolutionary and totalitarian. 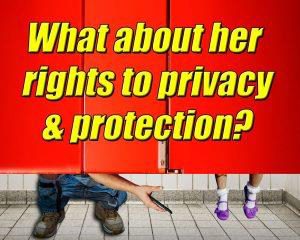 Men and boys who feel like they are women and girls are now dominating women and girls’ sports. To adopt gender identity as if it is the equivalent of biological sex destroys the very concept of girls’ and women’s sports. Girls and women are now being forced to shower with boys and men and their personal privacy is being violated in bathrooms, locker rooms and overnight school activities.

This amendment destroys the very concept of female! “Shall not be abridged in law on account of gender” would establish the spectrum of more than 87 genders into marriage law, family law, adoption law, school policies and curriculum, sports, business law, freedom to speak and freedom of faith.

Gender Identity is a feeling about who you are and it is a sexual behavior. Feelings are changeable. If this ERA constitutional amendment were presented to voters and were it to pass, endless lawsuits would ensue. In fact, a moving force behind HF13 is Gender Justice, a gender litigation law firm.

The following are some examples of the amendment’s consequences: