Top
You are here: Home / gender identity / A Defining Moment For Our Kids

Almost overnight, “gender fluidity” has been ‘normalized.’ “Gender fluidity” is an aggressive and radical concept that denies biology. It claims that binary genetic ‘male’ and ‘female’ are false and oppressive identities and are merely assigned at birth. It claims to liberate people by allowing them to choose their gender, to be male and female or neither. Gender extremists claim (and teach) that identities are fluid and may change over time, and that sexual attractions may or may not match up with a person’s chosen sex. Children are literally being hurled into Gender Chaos!

They are being taught to accept and not question another child’s gender confusion or what is known in the clinical world as Gender Dysphoria. An entire generation of vulnerable children is being deceived and gravely harmed.

In one school after another, a classmate who was a boy yesterday must today be addressed with female pronouns and allowed to share bathrooms and locker rooms with the girls. It’s even hip for yesterday’s girl to show up as a boy in the boys’ bathroom today.

Does this sound too crazy to be true? Please read on.

For example, the Anoka-Hennepin (A-H) School District’s Anti-Bullying/Anti-Harassment Task Force proposed a policy to “celebrate” and “affirm” Lesbian, Gay, Bisexual, and Transgender (LGBT) individuals. They claimed they were implementing the 2014 “Bullying Law” (the “Bullying Bill” CPL vigorously opposed). This law, as we predicted, opened the doors to teaching and normalizing deep gender confusion to our children.

The A-H parents, public officials, and school employees who spoke out against the district’s plan to normalize and celebrate medically and emotionally dangerous sexual behaviors were viciously and publicly targeted with verbal abuse by activists promoting gay-friendly “anti-bullying” policies. If adults with valid concerns are treated this way, how much more vulnerable are children in the schools who disagree?

Here’s another example. After a gender confused kindergarten boy was enrolled at Nova Classical Academy in St. Paul, the school began teaching all other K-5th graders—not kindness and respect toward others with whom they disagree—but rather, that Gender Dysphoria is normal and natural. The unfortunate child, seriously confused, is not being helped!

His own mother recounts him saying, “I am a boy, but I like girl things.” Sometimes, she says, he claims to be a boy and sometimes a girl—about half and half! She will “follow his lead” on what pronouns people should use when addressing him. She is committed to whatever makes him “feel good.”

Our schools are teaching children to ignore biology and accept feelings as ultimate fact. This is putting all our kids in danger!

Another 18 year-old female suffering from Gender Dysphoria described puberty as being “confusing and extremely difficult to maneuver… I was one of the guys that bled, which felt totally wrong and caused me a great deal of confusion and depression or dysphoria.” She settled on dangerous testosterone injections to stop her periods. Is this the best we will offer this precious young woman? Is this what an entire generation of young people must accept as normal?

We are at a defining moment. Silence is not an option! Our resources page provides questions you can bring to your own school administrators, School Board members and candidates. They are also useful for legislators and candidates for state office, since state law is complicit in forcing this upon us.
The 2014 Bullying Law mandated a new state agency, the School Safety Technical Assistance Center (SSTAC), It operates within the Minnesota Department of Education.

According to OutFrontMN, the SSTAC partners with them and other gender activist groups to establish “a statewide [primarily school-based] GSA Network [Gay Straight Alliances or, to some, Gender and Sexuality Alliances] to connect lesbian, gay, bisexual, transgender, queer and allied (LGBTQA) middle and high school groups.” Through this network, GSA students and advisors gain support, education, leadership development opportunities, resources, trainings, guest speakers, and “fun events.” GSAs hope to “change the climate “of schools to normalize, accept, affirm, and honor LGBT, and bully opposition into silence.

Where will this lead us? 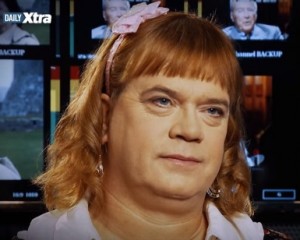 This gender chaos will lead our kids into even more bizarre scenarios. The 52-year old man, pictured at right, was married with seven children. He recently “came out” as a 6-year old girl. The cultural elites demand that we affirm him, as we were told to affirm the 66-year old sports hero Bruce Jenner when he ‘transitioned’ to a 20-something woman. Considering each of these individuals is denying reality, should we now affirm the anorexic child who believes she really is overweight just because she feels that way? Should we affirm any and all delusions if it makes the individual feel good? Lying to our kids like this will do them great harm!

Please consider an end-of-the-year gift to the Minnesota Child Protection League in support of our children. The Child Protection League protects children from exploitation, indoctrination and violence. We bring to light issues that threaten the safety of children. We are on the front lines identifying and challenging this “War on Kids” in Minnesota, networking nationally, and fostering a strong, grassroots resistance.

The Minnesota Child Protection League will continue to be passionately engaged—educating, providing resources, networking, and mobilizing.

By making a year-end, tax deductible contribution to the MN Child Protection League, you help us empower, activate, and equip parents and the public. For your support, we are so very grateful.