By now you may have seen for yourself the shocking Minnesota Department of Education’s Toolkit to Ensure Safe and Supportive Schools to Transgender and Gender Nonconforming Students. [See CPL May 9th update here.]

More shocking yet, however, is the fact that the Toolkit is a written and public unveiling of what the SSTAC has been presenting to Minnesota administrators and teachers as ‘Best Practices’ since soon after its inception in 2014 when the agency was created by the “Anti-Bullying” law. Child Protection League and other groups and individuals have viewed a video of the MDE district training and its handouts. 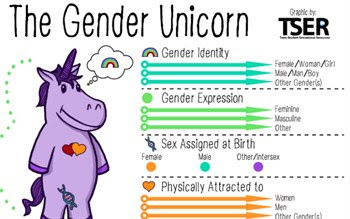 This is one example of a typical graphic the Minnesota Safe Schools Technical Assistance Center (SSTAC) uses to train teachers and school administrators on Best Practices in the schools. The graphics target children.

As a part of the 2014 Safe & Supportive Schools Act, the SSTAC was created as a new government agency within the Department of Education, authorized to provide training, model programming, and strategies to improve school climate and bullying prevention. [See CPL’s 2014 Update after the “Safe & Supportive Minnesota Schools Act” passed the legislature and was signed by Governor Dayton, Radical Group Claims Victory on Bullying Bill.]

The Bullying Bill was never primarily about bullying. It was much more a means for the Gay Lesbian, Straight Education Network (GLSEN) to get their curriculum into our schools. The proposed Toolkit is yet another tool they are using along with the training from the SSTAC to disseminate this radical ideology into Minnesota schools. [See CPL’s 2014 article, The Bullying Bill & ‘It’s Perfectly Normal’: What’s the Connection?]

However, local school districts have the authority to incorporate radical gender ideology into your schools without the Department of Education ever adopting the Toolkit. In truth, most parents have no idea what their district official gender policies are. Parents need to know if their children are being put in harm’s way.

Your school board and administrators need to hear from you. They need to fully understand how committed you are to opposing this dangerous agenda. And it is an agenda, because the SSTAC has no evidence to support the claims and objectives of the Toolkit.

The Department of Education has published a preposterous response to the overwhelming public outrage against the Toolkit. Here it is, from Craig Wethington, Director of the Safe Schools Technical Assistance Center (SSTAC):

“The toolkit does not serve as guidance, direction, state or rule; it is intended to provide additional information for districts to consider as they make their own locally-determined policies.”

Mr. Wethington’s answer is misleading and dishonest. In fact, it’s just spin. It is an attempt to portray this Toolkit as something other than what it is: pressure on school districts to adopt district policies that promote radical transgender ideology to our kids.

How can the Toolkit be called ‘Best Practices’ when it is founded upon invented gender identities and pronouns and solutions that invade the privacy of ALL children and put ALL children in harm’s way?

The Business dictionary defines Best Practices as “A method or technique that has consistently shown results superior to those achieved with other means, and that is used as a benchmark.” To claim this toolkit represents superior results is an egregious claim by the SSTAC. It is nothing more than a dangerous social engineering experiment with no data to support it.

If Minnesota’s Department of Education were/was sincerely interested in stopping bullying, it would not institutionalize bullying against anyone who opposes its gender-radical agenda. Your legislators and your district leadership need to know this. They need to work with you to oppose this. If they will not, they need to be replaced.

See the legislators’ letter to the Department.

The Toolkit is a written and public unveiling of what the SSTAC has been presenting to Minnesota administrators and teachers as ‘Best Practices’ since soon after its inception in 2014 when the agency was created by the “Anti-Bullying” law.

Feel free to use the information in this email in your own correspondence with the Department, your legislators and your school board members.

If your legislators signed that letter, please write or call them to thank them. Encourage them to read our updates to become familiar with the issues involved and to be equipped to effectively refute the attacks that are sure to come. If they keep silent after the attacks, they lose. The goal of GLSEN and groups like them has always been to ‘silence’ the opposition. We cannot let this happen on our watch.

If your legislators did not sign that letter, please contact them and ask them to oppose this Toolkit and protect ALL of our kids. This is not a choice between safety for transgender kids or opposition to the Toolkit. The Toolkit is unsafe for ALL children.

These are the appointed individuals who will decide whether to formally accept the Toolkit as its official Best Practices.