The Minnesota Department of Education held its annual Safe and Supportive Schools Conference on January 25th, 2017. The conference is for Minnesota educators, school support staff, parents, student leaders and education stakeholders. The primary focus of the conference was Social Emotional Learning (SEL). SEL is the most recent, aggressively marketed educational strategy for transforming the attitudes, values and beliefs of children. It has very little to do with academics.

Every breakout workshop was linked in some way to furthering the SEL objectives which revolve around “developing positive school and classroom climates,” “intentional instruction for social emotional skill development,” and “targeted SEL interventions.” 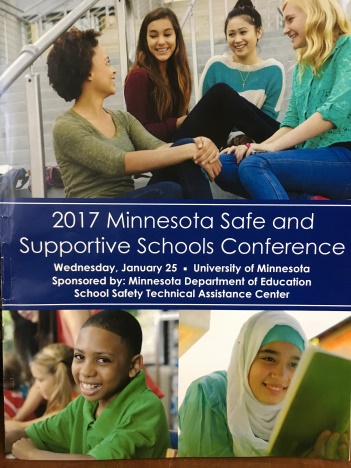 According to speakers at the conference, SEL standards and assessments will be implemented in all classes, pre-K through 12. To be effective, districts must be “saturated” with SEL. This includes hiring a director, SEL specialists, and training all the district professionals. Schools will track how students change over time, and make this tracking data part of the child’s permanent school record.

One conference attendee described what was presented about SEL this way:

Social Emotional Learning (SEL) instructors will train all teachers in “mapping cultural values” which means identifying a student’s “personal cultural values and preferences” in several categories. This information is collected in a “data dashboard” and measured to see whether an individual demonstrates changes in regard to attitudes, feelings and behaviors. The results are entered into a national SEL data bank.

Since “safe and supportive” school policies are purportedly about stopping real bullying, it is quite troubling that under the guise of ending bullying, SEL is being used to chart students’ personal cultural values, attitudes, and beliefs, and then measure, record, and ultimately change them.

Based on the content presented at the January SEL-focused Safe and Supportive Schools Conference, Islam and LGBT are the two biggest cultural issues of the day.

The Executive Director of CAIR-MN (Council on American-Islamic Relations), Jaylani Hussein, gave a detailed presentation about Islam, its beliefs and religious practices. (A stated purpose of CAIR is to “empower American Muslims.”) Hussein expects schools to accommodate Muslim foot washing, Ramadan observance, Friday prayer days, and to provide quiet places for students to wash and pray. He wants school curriculum to be “sensitive” to Muslim students’ cultural and religious needs and practices.

In alignment with Hussein’s presentation, the U.S. Department of Education (USDOE) has a Stop Bullying blog to “protect Muslim youth.” Remarkably, that blog encourages schools to counter bigotry against Islam by having female students wear a hijab for a day. The blog links directly to many anti-bullying resources from the Anti-Defamation League (ADL), a group recognized by most observers as a far-Left advocacy group. One ADL link is a resource for children’s literature, a collection of pure Islamic indoctrination. Another links to “anti-bias“ lesson plans,” with such topics as, “The Muslim Ban and the Power of Protest” and “Sanctuary Cities and Non-Violent Resistance.”

This isn’t anti-bias. It is training children to be activists and agitators and to adopt a sanitized view of Islam.

In the “Keys to Safe and Welcoming Schools” workshop, Cheryl Green, an “expert trainer” in the Welcoming Schools curriculum and coordinator for Hamline University’s Bullying Prevention Certificate Program, described how to create student “allies” for their agenda. SEL’s “showing empathy” outcome plays a critical role in developing ally behavior in students and adults, according to Green. Green teaches radical gender theory to educators—primarily elementary teachers.

In the workshop “LGBTQ: Early Conversations Promote Healthy Identities and Build Allies,” we are led to believe that adults are confused if they believe that boys wearing dresses is unnatural, or that students are either biological boys or girls. Rather, students are taught that gender is fluid and can be “changed” simply based upon how they feel any given day. Additionally, anyone who thinks sexual intercourse should be reserved for a man and a woman within a committed marriage relationship is considered a bigot.

What you read above is not academic instruction. It is intense indoctrination and mind manipulation, forcing children into emotional and intellectual compliance. SEL is to be incorporated into conversations and activities throughout the school day, directing and assessing how each child “feels” and “believes.” Teachers, by the way, won’t be spared either. They will also be evaluated on their EQ – “emotional intelligence.”

The language of “Safe Schools” and SEL has been hijacked by a very radical ideology. When Minnesota was passing its 2014 “Safe and Supportive Schools Act,” Child Protection League played a key role in opposing it. Some legislators could see this coming. Not a single Republican lawmaker in either the House or Senate voted for the bill. Opposition debate continued for almost twelve hours, into the early morning hours, because they recognized the radical underlying ideology. A description of that debate is on our website.

The federal government has been a key driver of the fraudulent Safe Schools mandates. A 2014 USDOE directive notified school districts that they could lose their federal funding if they didn’t allow gender-confused students into the showers, locker rooms, and bathrooms of their gender “identity.” (The U.S. Department of Justice pushed that directive onto Minnesota high school sports teams through the Minnesota State High School League immediately after the “Safe and Supportive Schools Act” was passed.)

There is good news however. That federal directive is now on temporary hold until the Supreme Court rules on its validity. The Trump administration has also withdrawn the federal government’s defense of that policy, giving us cause to hope for a complete withdrawal of that mandate.

What the future holds

We expect important changes to be coming from the USDOE under the new administration. We will monitor those changes carefully.

We also hope the new administration will overturn a 2015 mandate from the USDOE which required districts to proactively incorporate Islam into the curriculum to counteract any negative views students may have of Islam.

However, in spite of any federal relief that may come, Minnesota’s “Safe and Supportive Schools Act,” still keeps our children in danger. The Dayton administration is incorporating the federal mandates noted above into his interpretation of Minnesota’s anti-bullying law. And SEL can be adopted administratively without a federal mandate. Minnesota’s education department is every bit as radical as the USDOE has been. We must hold our own state accountable!

Expect these issues to be front and center in the 2018 Governor and legislative elections.

In the meantime, learn about SEL. Speak to your school administrators and legislators to oppose it. The Child Protection League is about protecting children from exploitation, indoctrination, and violence. We will continue to monitor and address SEL and Safe Schools in Minnesota.

[CLICK HERE to print off a copy of this article to share with teachers, school administrators, school board members or parents.]