The May 13th Obama administration directive does not carry the force of law.

Last month, extremists within the Obama administration aggressively escalated the “Raging War on Kids.” Bypassing Congress, the U.S. Departments of Justice and Education unilaterally declared that existing federal law requires that boys are allowed into girls’ bathrooms, locker rooms, and showers in all public schools. The fact is, federal law does not require that boys who are transgender must be allowed into girls bathrooms and showers!

According to legal scholars and the Minnesota School Board Association (MSBA), that May 13th federal “guidance” from the Departments of Justice and Education “does not carry the force of law.”

Why your school board members
need to hear from you!

Many school superintendents and school board members are taking advantage of that federal transgender directive as a pretext to implement a radical gender-fluid policy and curriculum in their districts. For example, the Albert Lea school district quickly announced it will comply, as did the Litchfield School District. But be advised: however federal agencies may threaten to withhold federal money, they cannot proceed without first overcoming huge legal hurdles. Eleven states have filed a lawsuit against the federal threat to withhold funding. Do not let your school district be bullied into compliance with unenforceable threats!

The bullies will be successful if the public is silent!

Our experience is that when the public is willing to step up and speak out, to be public and persistent about their opposition and to organize, they win.

In contrast, when the public is silent, when they leave it to others, when they cower in fear of being called names, they lose. It’s as simple as that!

The policies our schools adopt set the standards for our culture. Engaging with school districts is an urgent civic responsibility, even if you recommend removing children from the public schools; even if you have no children. All taxpayers support the public schools, and school boards are accountable to you. Taxpayers pay their salaries.
While federal “guidances” have no authority to dictate local policy, yet if we are silent, if we allow our school districts to comply, then federal “guidance” is perceived to be law.

Is your school board willing to comply? Find out. Call them, write them, get a group together, show up at school board meetings, and run candidates against them if they don’t listen. Do whatever it takes to protect our children from dangerous transgender ideology!

What does the federal “guidance”
claim to mandate? 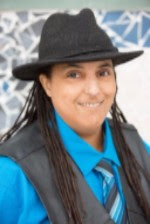 Rox Anderson of OutFront MN and the Transgender Health Coalition is a “consultant” and “training partner” with the Minnesota Department of Education, training teachers and administrators around the state that sex is “assigned” at birth, and genes and chromosomes or anatomy have nothing to do with that determination. Rox claims a “gender non-conforming” identity (no gender boundaries) and also “gender queer.”

Meanwhile, the Minnesota Department of Education is travelling the state training teachers and administrators with a “consultant” and “training partner,” Rox Anderson, who is an employee of the Transgender Health Coalition and OutFront MN, a gender-radical activist group. OutFront MN led at the legislature for the passage of the 2014 “Bullying Bill” which created the Safe and Supportive

Technical Assistance Center, a new Division within the Department of Education set up to train teachers and districts in the new gender fluid ideology.

The law doesn’t directly admit that, of course. But, as we too often discover these days, activists (and legislators who do their bidding) insert new meanings into words. In the new world of Gender Speak, if teachers and students do not affirm, honor and celebrate gender fluid ideology, they are guilty of bullying, and they are making schools “unsafe.” Since bullying is against the law, and the Safe Schools Act is supposed to be all about making schools safe, by extension, schools can be accused of violating the law if they refuse to teach gender fluid ideology in the classrooms!

In this way, “anti-bullying” and “safe schools” are phrases that have been transformed into weapons to subdue the vast public into submitting to the Gender Fluid Orthodoxy! We have a real war on our hands, and the laws of the land have become a sword turned against the citizens themselves, and against our children.

Rox is a Female to Male transgender who “likes pronouns like they and them.” Rox trains Minnesota teachers that sex is “assigned” at birth according to “how much tissue is in the groin area,” and “it actually has nothing to do with the genes or chromosomes or any of the anatomy that we need in order to safely determine gender. Gender is a construct.” The Minnesota Department of Education introduces Rox as “a leader in the State of Minnesota in this work.”

“Gender non-conforming is terminology that lines up nicely for me,” Rox informs her teacher audience, as she defines proper transgender terminology for them. “I like that. It is also an identity that I claim. A gender non-conforming person is someone who doesn’t conform to the standards that we set over our own gender.  Gender queer is also a term that I like and I feel connected to.”

Roxanne’s troubling identity and anti-science dogma on biology are being elevated to normalcy and even emulation by the Minnesota Department of Education. While compassion might certainly be in order, our own state agencies have clearly been deeply compromised and our schools are in alarming danger when our teachers and our children are being routinely subjected to this falsehood.

Our children’s future truly depend upon you! Get a copy of our DVD, Gender Fluidity and Other Fables: Understanding the Harm of the Transgender Movement, to inform yourself and to help inform others. If we do not speak up now, then when?

2016 is an election year. Candidates, every one of them, need to hear from you.