While Americans wrack their brains to understand the high school massacre in Parklands, Florida on February 14th, alarming new information points to a dangerous school discipline policy that set the stage for this tragedy.

That same policy, instituted under the Obama administration in 2014, is also currently operating in many school districts in Minnesota and around the country. In short, law enforcement and school administrators are trained to stand down in the face of student lawlessness and violence, to overlook it in order to ease racial inequities in school discipline reporting. Consequently, many schools are now extraordinarily dangerous for students and teachers alike. Refer to Racial Inequality in School Policies.

Nikolas Cruz, 19, the admitted gunman in the bloody rampage at Stoneman Douglas High, had been recently described by one FBI tip caller as “about to explode.” The caller had also reported that information to the Parkland Police Department, but she got no response. From 2008 to 2017, Broward County deputies received at least 18 warning calls about Cruz, yet not one warning prompted a single intervention concerning threats he was going to shoot up a school and other threats and acts of violence. At least five callers mentioned Cruz’s access to weapons.

Some startling school policies between Broward County police and Parkland School District have come to light that could be blamed for the outrageous inaction of law enforcement before and during the shooting that left 17 dead and many more injured.

“What I stumbled upon,” reports TheLastRefuge in an exhaustive study, “was a Broward County law enforcement system in a state of conflict. The Broward County School Board and District Superintendent entered into a political agreement with Broward County Law enforcement officials to stop arresting students for crimes. The motive was simple. The school system administrators wanted to ‘improve their statistics’ and gain state and federal grant money for improvements therein.” They were adopting the Miami-Dade school plan, as seen below. In Broward County, felonies, even violent felonies, were now being excused and even hidden. Refer to Unrolled Thread from @TheLastRefuge2. 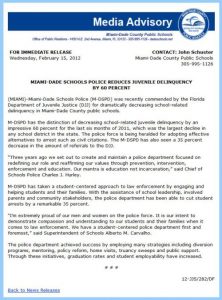 Did law enforcement in Broward County stay silent about Nikolas Cruz’s numerous threats prior to his Valentine’s Day shooting spree so the school district would be able to apply for and obtain grants based on a false premise of decreasing school related incidents by not doing anything about them?

We now are hearing reports that Broward County deputies who arrived at the high school were told not to enter the school during the shooting unless their body cameras were on. Yet, reports are that the deputies didn’t even have body cameras!

Similar Programs are in Place in Minnesota

Katherine Kersten writes in a 2017 article, No Thug Left Behind, that St. Paul schools became obsessed with “racial equity”. “Equity advocates” were brought in to announce that the racial-equity discipline gap was the result of teachers’ “white privilege,” cultural ignorance and racial bias. As a result, student discipline was restricted and a “diversity consulting company” from California, Pacific Education Group (PEG), was hired. (Other Minnesota districts have also paid PEG handsomely for the same consultation services.) Under the Obama administration, racial equity in school discipline became a top priority. Obama’s Education Secretary Arne Duncan famously proclaimed that adult behavior must change, not the student’s behavior, in order to challenge the school-to- prison pipeline.

According to Kersten’s article, former St. Paul Public Schools superintendent Valeria Silva moved to eliminate what she called the “punishment mentality” by lowering behavior expectations and dropping meaningful penalties for student misconduct in an attempt to close the school-to- prison pipeline. Silva implemented a new protocol and changed interactions between the schools and the police.

In 2016, the St. Paul police department agreed to a new style of uniforms for the School Resource Officers (SROs) so students would be less intimidated by the officers. In addition, the school administration would keep closer tabs on the work of SROs by collecting detailed data on officers’ activities. Refer to Under new agreement, St. Paul school leaders to supervise student arrests.

As one teacher puts it, “SROs are to be social friends with the kids and unarmed because students find it intimidating. And they have reasons that students can’t be arrested: having marijuana, alcohol/drugs, assaulting a teacher, fights or thefts. They are sent home for the day to their parents. No record when there is a dismissal. Staff cannot call 911. This is happening right here, in the Twin Cities. People would be blown away if teachers living it every day could talk!”

With the new protocols in place, disorderly conduct charges for the school district “dropped” 38 percent from the previous school year and school-related offenses referred to the Ramsey County attorney’s office also significantly declined. The decline was not, however, due to a reduction of offenses. Rather, certain offenses were no longer allowed to be reported.

Kersten quotes a teacher who said there is now a segment of kids who consider themselves untouchable because of changes in student discipline. Kersten wrote about “rowdy packs of kids” rampaging through hallways and invading and disrupting classrooms. City Pages reported students standing up and leaving the classroom in the middle of lectures. Riots or brawls have occurred at several St. Paul High Schools including Como Park, where six fights in three days prompted police to use chemical irritants to break up the fighting students.

St. Paul police spokesman Steve Linders told Kersten, “We are seeing more violence and more serious violence. Fights at schools that might have been between two individuals are growing into fights between several individuals or even melees involving up to 50 people.”

As a result of the increased violence, teachers have suffered injuries while resisting classroom invasions or intervening in fights. One teacher at Harding High School, who herself had been threatened with death and shoved into a shelf by classroom invaders, told City Pages that to keep out those who don’t belong in her class, she has her students use a “secret knock” to enter her classroom. Students create chaos and know schools have little recourse, while beleaguered teachers attempt to teach uncontrollable students – all to manipulate statistics and make the school look good. Refer to Distrust and Disorder: A Racial Equity Policy Summons Chaos in the St. Paul Schools.

With These New Policies in Place, Who Exactly is Benefiting?

It appears to be no one. In fact, the danger to teachers has become so severe that the 2016 Minnesota legislature passed a law empowering teachers to remove a student from the classroom for violent or disruptive behavior. A KMSP news report from April 4, 2017 tells the story of this legislation. Refer to MN Statutes, 121A.53 to read the law.

And then we wonder how in the world something like what happened at Marjory Stoneman Douglas High School could happen in the first place.