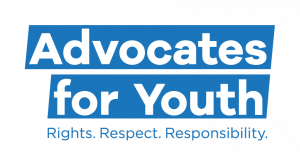 Last month, informed and concerned parents exposed a sexually explicit and morally bankrupt sex education curriculum during a Richfield, Minnesota school board meeting. Called the 3R’s; “Rights, Respect and Responsibility,” the harmless sounding title “deliberately” deceives parents, as one testifier charged. Parents read the role playing scenarios directly from the curriculum teaching kids how to “consent” to sex. The lesson plans were so shocking, mainstream media like the Washington Examiner and the Fox News Network headlined the story across the country. Now the Richfield School District is scrambling to dissociate itself from its own program.

This lesson plan includes a note for teachers that explains how straight boys might “have a homophobic response” to being asked to engage in gay role playing.

Just one example of what is considered “age appropriate,” in the Using Condoms Effectively 3Rs lesson plan for 8th graders, teachers are instructed to say:

Richfield District Runs Away from 3Rs

The national exposure put the district on the defensive and now they are trying to back away. “We only use a few select lessons from this program—not the entire curriculum,” insists the unsigned statement, Teaching Students about Sexual Health in RPS District News, posted on the district’s website.

“At the secondary level, we do not use the 3Rs,” the statement argues. “Our secondary health teachers use two to three lessons from Positive Prevention PLUS, which is an evidence-based curriculum that is aligned with the National Sex Education Standards (PDF).”

Not true, states the mom whom the superintendent invited to review their sex ed curriculum. She was specifically told that the Advocates for Youth 3Rs curriculum was “used in all their schools … No other curriculum was offered for review,”

“I am deeply troubled by the school’s denial of the curriculum they told me they used,” said the mom who had thoroughly reviewed the very lesson plans they claimed they were teaching. “Either they lied to me then or they are lying now, or they have made a sudden change to their curriculum.”
Mom’s response and testimony to the Richfield School District (PDF)

Further, to say that the Richfield curriculum is aligned with the National Sex Education Standards confirms where they are getting their resources. The National Sex Education standards are created by Advocates for Youth, along with SIECUS (Sexuality Information & Education Counsel of the US). SIECUS is the most notorious proponent of the explicit, offensive Comprehensive Sex Education (CSE) in the country. SIECUS calls itself “SIECUS: Sex Ed for Social Change.” They proudly announce that “SIECUS advances sex education as a vehicle for social change.” Between Advocates for Youth and SIECUS, they use Sex Education to indoctrinate our youth with a highly politicized ideological agenda that incorporates the entire “Equity/CRT” worldview and focuses on training students to become political activists.

The National Sex Education Standards begin with a link to the Advocates for Youth website which in turn opens with a commitment to “social justice” activism. (“Social Justice” is the euphemism for “dismantling systems of oppression” in an irredeemably racist, sexist system. The “system” they are dismantling is our constitutional Republic.) The website reads:

Young people understand that reproductive and sexual health and rights are inextricably tied to social justice and the fight for liberation. Join thousands of youth activists and adult allies as we build a better and more equitable world.

Young people are leading the movement for change. They are marching in the streets for equal rights. They’re walking out of classrooms for climate change. They’re standing up for people killed by guns. They are ending stigma around abortion. And they’re rewriting the script that tells us how to think, behave, and treat one another.

This is Comprehensive Sex Education: “Join youth activists and youth allies working to create a world that is just, safe, and healthy for all.”

Both the Departments of Health and Education partnered to promote and train teachers in the 3Rs curriculum, essentially already implementing it in many Minnesota schools. 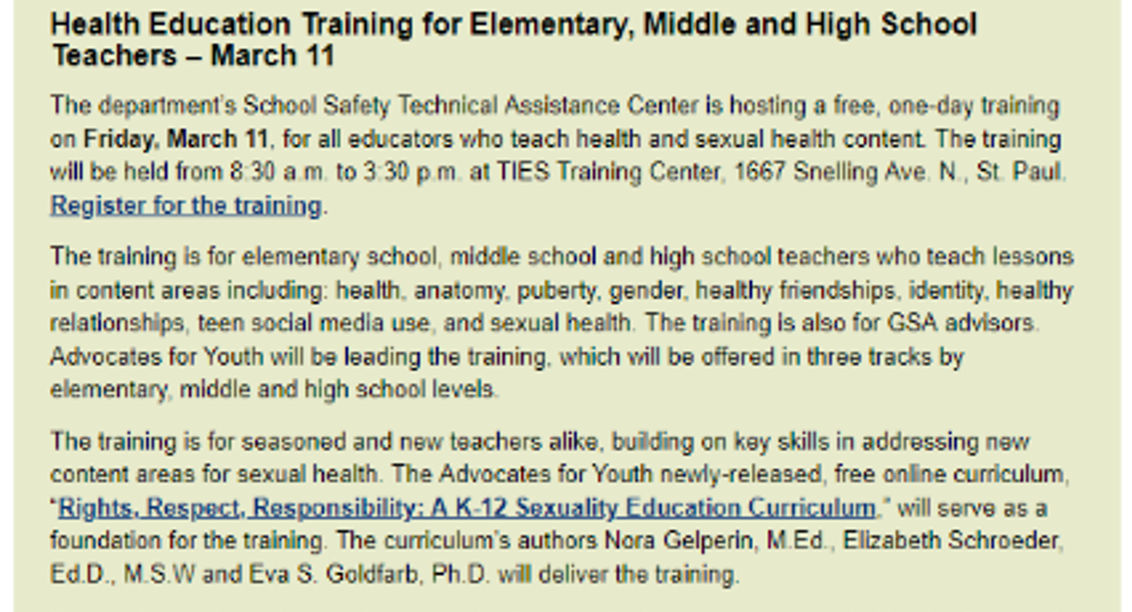 In an effort to force this type of Comprehensive Sex Education (CSE) curriculum like 3Rs into Minnesota schools, Democrat House legislators voted in 2019 to mandate ALL Minnesota preK- 12 public/charter schools to teach CSE. The bill was brought up again in the next legislative session. If passed, it would completely bypass the desires of local school boards and their local communities. Fortunately, the Senate did not pass the bill or otherwise no school district today could opt out of CSE, because it would be a state mandate.

Public schools are OUR schools, whether our children are enrolled there or not. We pay for them with our tax dollars. We elect and pay for the school board members and the administration. We are responsible for what the children of our community are exposed to. We cannot walk away!

Refer to Comprehensive Sex Education (CSE) for background information. Look under Resources for tools on how to make an open records request and to evaluate the school’s sex education curriculum.

If your district is using Advocates for Youth 3Rs or any other CSE curriculum, here are some action options: