‍Remember who we are. Remember our history.

‍The Minnesota midterm elections are over, and the results are in. Some results are great, and some are truly terrible.

At least 50 Minnesota conservative school board candidates were elected by their neighbors, reflecting parents’ rejection of ‘woke’ ideologies and an urgent understanding they must assert their authority over what their children should learn. Parents do not believe traditional academics should be replaced with racist, activist, hyper-sexualized and gender bending curriculum and books. They do not agree that their children’s values should be transformed through Social Emotional Learning (SEL).

These candidates, in hard-fought campaigns, took on the powerful and well-funded teacher’s union which backs all radical social justice activist agendas. In so doing, they faced down publicly vicious smear attacks. And they won.

If you are in a district where school board candidates successfully stood against these forces, please support them going forward. Their challenges are only beginning, and they need you!

Minnesota’s school board races reflected the national trend. Mama and papa bears were poked, and they rose up everywhere to save their children.

We must be clear eyed and honest about what the elections results portend for Minnesota. Minnesota citizens have a difficult road ahead, but the first step is to honestly assess what happened. Only then can we do what it takes to work for positive change.

This election brought Minnesota’s entire legislative and executive branches of government under the complete control of a single political party that is run by extreme anti-American activists, people who intend to dismantle our free nation as we know it. These are the leaders of the culture war. Cultural-Marxism (PDF). They have had control over Minneapolis and St. Paul for 50 years and we can clearly see what has happened to these formerly great cities. That Democrat Party has now been given the keys to the entire state.

For background: The Governor has constitutional authority to appoint all the state government bureaucracy. This includes the Departments of Education, Health, Public Safety, Human Rights, and innumerable boards and commissions such as the Professional Educators and Licensing Board (PELSB). You are well aware that PELSB has proposed Marxist-based teacher licensing rules for teachers who hope to obtain or renew their Minnesota teaching license.

How did this happen? Do these Marxist political leaders truly reflect the will of the majority of Minnesota voters? We don’t think so. In fact, we observe that most Minnesotans strongly oppose all of this.

CPL has been opposing policies that harm children for nearly a decade. Some of them are:

We have consistently exposed and educated the public about these policies that harm children, supported curriculum transparency requirements, protected the rights of parents to oversee the education of their children, and supported repealing the obscenity exemption for schools and libraries.

Since all of these policies are championed by the Democrats we cannot count on our legislature to stop any of them; in fact, we must expect the opposite. Therefore, now more than ever the power to resist these policies and more like them, rests in the hands of the people. The cultural radicals think they hold all the cards, but they do not because the legitimacy of this election is in serious question.

The following chart is Minnesota’s real-time votes for Governor. 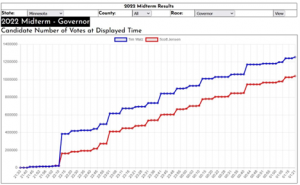 ‍What is that sudden data dump favoring Tim Walz by about 200,000 votes at 10:10 p.m.? And why does the ratio between the two candidates remain identical, 53.9%, at every reporting interval after the dump? It is not logically or mathematically possible. Other charts for Arizona, Georgia, Nevada, and Michigan show similar impossible abnormalities.

Every citizen expects and deserves full assurance that elections honestly reflect the majority will of the voters. From the available information, the assurance of a valid election is missing. These are serious questions that absolutely must be addressed, or it will remain a dark cloud over the legislature as they begin their session next year.

It is time for all of us to speak up. Voters need answers. They deserve answers and Minnesota leaders must demand them. Afterall, they work for us! This cannot be swept under the rug the way the 2020 election challenges were ignored. Those who did speak were silenced.

CPL is nonpartisan. We’re not afraid to call it as we see it. So, while Republican legislators have in the past resisted most of the egregious legislative policies and proposals, many have been complicit. Now more than ever we need principled leaders who will not be intimidated into silence or be afraid to look at the facts and speak clearly for the freedom they have been elected to defend.

Because courage is contagious.

Citizens of Minnesota need to be unflinchingly fearless leaders during these disturbing times. Because we truly are fighting for our nation.

We are not discouraged, because we understand our calling. Powerful forces of evil are arrayed against our children. We will continue to expose them and stand against them.

We hope you share our resolve for such a time as this.

We are called to this time and this place. We believe you are too.