Top
You are here: Home / CPL Article / Minnesota – Abortion Up to Birth

Note: The MN House is moving quickly on this wildly unpopular legislation. The MN House rushed it to a vote today and it is still going through committees in the Senate.  Please contact your legislators now!

The newly minted Minnesota Legislature has signaled its priorities by their first order of business. HF1 and SF1 will enshrine into state statute a ‘right’ to unrestricted abortion up to birth in Minnesota. 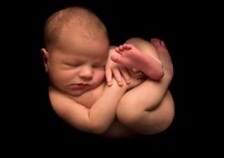 Called the PRO ACT (Protect Reproductive Options); it states that abortion is a “fundamental right” and that the state may not “deny, restrict, or interfere with” the decision to have an abortion. It also does not recognize the humanity or intrinsic value of the unborn child and does not extend any rights or protections for them under Minnesota state law. In fact, it goes so far as to even deny protection to unborn children of pregnant women who are killed by some form of criminal assault or an accident. It’s that extreme. The majority of Minnesotans of every political stripe do not support these extreme provisions!

Please contact your House and Senate members and ask then to VOTE NO on these horrific bills and instead do everything in their personal and political power to protect and champion innocent life. Contact your legislators.

Minnesota History on the Abortion Issue

The U.S. Supreme Court Dobbs decision last summer finally righted unconstitutional law which horrifically permitted the slaughter of over 60 million unborn babies in the United States since Roe v. Wade ruled it was a Constitutional ‘right,’

The Supreme Court returned the abortion issue back to each state. Many states have moved to PROTECT the innocent. But elections, especially deeply flawed elections, have consequences, and Minnesota is moving fast to DESTROY the unborn.

In contrast, a single Minnesota judge back in 1995 (Doe v Gomez) arbitrarily declared abortion a constitutional right and decreed that taxpayers must finance abortions for low-income women. And in 2022, a single judge wiped out Minnesota’s legislatively passed safeguards, such as parental notification for minors and a woman’s right to know the baby is alive (informed consent).

These activist judges made a mockery of genuine constitutional law by fully legalizing unrestricted abortion in Minnesota. If this Minnesota legislature adopts into statute HF1 and SF1, what the judges have already wrongly forced upon us, we will not only need to overturn an evil court decision but also repeal state statute.

Most Americans do NOT support unrestricted abortions.

Shortly after the Dobbs decision, the Pew Research center conducted a poll that found that abortion during the second and third trimesters of pregnancy are not supported by most Americans.

Since 1998, the Minnesota Department of Health (MDH) is required by MN Statute § 145.4134 to provide a “Report to the Legislature: Induced Abortions in Minnesota.” The unborn are referred to as “products of conception.” But if those babies miraculously survive an abortion, they are referred to as an “infant.” What changed other than their location? Does location change a baby’s fundamental nature?

We encourage you to look at the data. You will discover that viable babies do survive abortions…they are “born alive.” In 2021, 5 babies survived an attempted abortion. The report states, “No measures to preserve life were reported and the infant did not survive.” Were these infants left to die on a cold, hard table alone? Or was there a compassionate nurse who cried while holding them so they could hear the beat of a broken heart and be kept warm until they passed? Will this extreme bill permit doctors just to snip their necks? Where is the line crossed?

While we sympathize with women who are abortion minded because they think they have no other choice, many services and organizations are available to them…people eager to help, provide counsel and resources and offer the life-giving option of adoption. These women are NOT alone! Please contact us for recommendations if you or someone you know is looking for options. 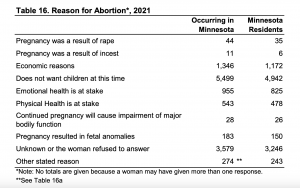 The reality is that most babies are aborted simply because they are not wanted. See the chart from the 2021 Legislative report.

There are families who want those children.

The horror of abortion is a stain on our nation and our state that is glossed over by euphemistic terms like ‘reproductive rights’, ‘choice’, ‘bodily autonomy’, and ‘products of conception’.

We need to work to help abortion-minded women understand the life-giving options available to them that will protect, not destroy, innocent lives. Choosing life is a decision that ensures their consciences can be clear. Many women who have chosen to end the life of their own child find the decision haunts them the rest of their lives.

Somebody needs to speak for those who can’t speak for themselves. We hope you will do so.