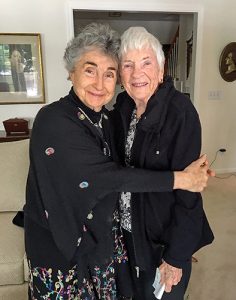 Marlene Reid was honored at a special gathering of family and friends to receive our first newly established Dr. Judith Reisman Award.

Marlene’s advocacy began in the 1960s after she read A Choice Not an Echo by Phyllis Schlafly. She distributed copies of the
book to anyone who would read it to educate others to what she was learning. From there she became involved in politics where
the fight seemed to be. She began with like-minded advocates to expose the humanist, feminist, homosexual, and abortion
advocate agenda. Even then she was fighting against progressive education, getting “sexism” out of the schools, changing
students’ values, and substituting Social Studies with diversity and multiculturalism.

In the 80s and 90s, she met Dr. Judith Reisman at a conference. Marlene became an immediate fan for what Reisman was doing
to expose Dr. Alfred Kinsey’s fraudulent research and its effect on sex education that was being pushed in the school system. Through conferences, workshops, letters to the editor and whatever means was available, Marlene continued to spread the vital work of Dr. Reisman to the grassroots. Marlene stands out as a pioneer building the foundation for our continued fight for the welfare of our children.