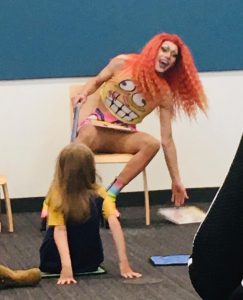 Minnesota Hennepin County Libraries found themselves under long overdue scrutiny last month after pictures of local drag queens “Gemini Valentine” and “Sasha Sota” reading to toddlers were posted on the Child Protection League Action Facebook page. Gemini arrived in a skin tight leotard which came to a deep V at his crotch to the Hopkins Library, and Sasha wore a tiny miniskirt to the Ridgedale library. Sasha was caught on camera numerous times flashing his nylon covered crotch to the children in attendance. 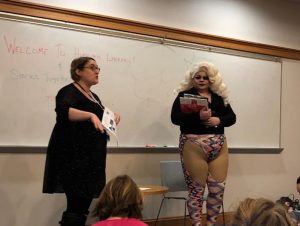 Gemini Valentine at the Hopkins Drag Queen Story Hour, ready to read LGBTQ-themed books to toddlers and preschoolers, celebrating “self-expression, dress up, and gender fluidity,” according to Janet Mills, the Hennepin County Interim Library Director. Gemini Valentine “The Goulish Glam Doll,” advertising his performance at The Saloon for the “Drag Me to Hell All Stars Lip Sync Tournament”. Video clip of Gemini’s performance.

Hennepin County Libraries scheduled 15 of these “Story Times with Drag Performers” during the months of October and November. The library hired men involved in the adult entertainment industry to read LGBTQ themed books to toddlers and preschoolers in order to “give children a chance to celebrate self-
expression, dress up, and gender fluidity” according to Janet Mills the Interim Library Director.

Child Protection League reached out to every member of the Hennepin County Library Board numerous times with serious questions about the programming and obvious safety concerns. We wished to know specifically why they conduct no formal background checks on the men. We wanted to know why they felt it was appropriate to allow men involved in erotic adult entertainment access to little children. We wanted to know why they ignored the well documented alarms raised by clinical therapists and experts on the methods sex traffickers and pedophiles use to groom targets—experts who pointed out that Drag  ueen Story Hours were the ‘greatest grooming programs’ ever devised. We wanted to know why all the books chosen for these story times advanced an agenda untethered from biological reality and one which deliberately confused children.

Two Board members responded expressing concerns about the programming but did not specifically address our questions above. So we asked every Hennepin County Commissioner the same questions since they provide oversight for the Library Board.

All but one ignored our questions. The official response came from another Hennepin County Commissioner, Debbie Goettel, who replied “I can promise that the story time programming is always appropriate for young children (ages 2-6).” (emphasis added)

In reply, we sent photographs of the drag performers to both boards asking again if this is what they considered “always appropriate”. We heard nothing for days.

Child Protection League Action’s FaceBook post (over 658,000 views as of this writing) went viral overnight and was picked up by numerous national news outlets such as:

Refuting the libraries’ claim, the overwhelming response to drag queens reading to children has been extremely negative. Thousands of commenters have accused the libraries of a clear dereliction of duty to protect young minds from corruption. Thousands are outraged that public tax dollars are being used to subsidize activities like this that are totally inappropriate for young children. Yet, our own local media
has deliberately ignored it. The library has only recently scrubbed its website of all mention of the drag queen story times as well.

When The Blaze reached out to the Hennepin County Library Board for comment, their official reply stated “Storytime Together with Drag Performers is a relatively new program in the Hennepin County Library system” …that they were “still learning — and unfortunately making mistakes…..Partway through this year’s schedule, we realized the need for a performer dress code. We followed up right away with each of the performers to ensure that their costumes are appropriate for the audience and activity.” This was the last communication we received from them as well.

This is a stunningly tone-deaf response. Their only proposed correction is to encourage a better dress code? Still no background checks? No concerns about the sensual professional life lived by night for most of these drag queens? No concerns about confusing little children about the realities of biology? No concerns about wearing down children’s natural protective boundaries to avoid people with histories of predatory behavior and, sadly, very often self-destructive behaviors?

Under no circumstances are Drag Queen Story Times a demonstration of responsible stewardship of public funds or the public trust. Five Hennepin County Library Board positions are up for appointment this fall. Child Protection League encourages responsible adults to apply for these positions to provide wise and discerning oversight that is demonstrably needed.

The following are ways that you can keep this momentum going to stop Drag Queens from being allowed to read LGBT+ and transgender books to our youngest children.