We are approaching 3 years since the early Covid hysteria. Data is pouring in that these injections are extremely dangerous for children and adults.

On Wednesday, December 7th, Senator Ron Johnson – R (WI) held a 3 hour roundtable requesting testimony and data from preeminent doctors, whistleblowers, attorneys, analysts, and vaccine injured people. All have been censored for raising the alarm about the shocking numbers of vaccine injuries and deaths they have witnessed since the shots were mandated for health-care workers, students, the military, and many private businesses. 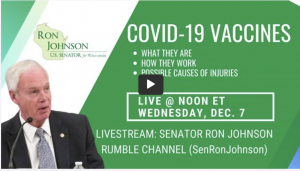 Many of the physicians on the panel have been persecuted by the media and their peers for developing their own early treatment protocols because the CDC did not have one! It still defies common sense that the country with supposedly the premier healthcare system in the world had no early treatment covid protocol! People who tested positive were essentially told to ‘just go home and tough it out.’ If you turn blue…’go to the ER’. The panel doctors successfully used inexpensive and proven repurposed drugs as part of their early Covid 19 treatment protocol and dared to advocate for them. In other words, they were vilified for being good doctors!

The roundtable is an outstanding session filled with data and information that is not opinion but fact. We implore you to listen to the entire session and share it widely as this is the only way we can spread the truth and keep others out of harm’s way. It is critical information to equip you.

Dr. Robert Malone one of the inventors of mRNA technology was asked directly if the Covid 19 shots were “vaccines” or “gene therapy.” He said they were “gene therapy.”

Why is this significant?

In an earlier interview Dr. Malone clarified what that means:

Covid 19 presents virtually no risk of death to children and young adults as evidenced in the graph. (Had America adopted early treatment, this graph would look significantly better for older adults too.) 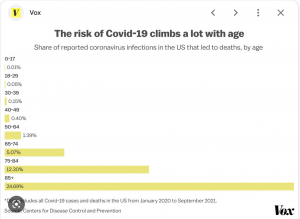 Two years into the shots however, there is abundant and horrifying evidence the shots are injuring and killing large numbers of people, including children. How is this possible and yet we are still being told to get “vaccinated and boosted”?

There were so many significant take aways from the roundtable, but several stand out:

We could highlight so much more. But the sycophants of the mainstream media (who are heavily funded by Big Pharma) have completely ignored this information, so it’s up to us to share it and create a multiplier effect.

Part of the urgency behind this call to action is that on Monday, Dec. 5, 2022, Pfizer announced they were seeking EUA (Emergency Use Authorization) approval for their new mRNA based “bi-valent” covid/flu booster for children ages 6 months to 4 years old. By Friday, December 9th, they had approval.

We will publish an alert about the bi-valent authorization in the next few days.

It is well documented the CDC has ignored their own safety signals.

Please listen to the roundtable. It will likely become the basis for the promised Congressional hearings to investigate professional, pharmaceutical, and governmental malfeasance. Please contact your Congressional Representative and request they commence these hearings without delay.