Fox News in New York reached out to Child Protection League for reaction to the recent Washington Post article normalizing pedophilia. Julie Quist, our CPL chair, was interviewed and her comments were printed in the Fox News digital article. 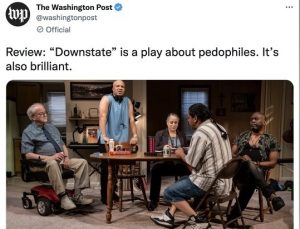 In the culture war, pedophilia is something that is moving toward being accepted as normal behavior, just one of the gender spectrums, centered on the perpetrator rather than the victim. The Post’s chief drama critic, Peter Marks, described the play Downstate as “brilliant” that portrayed convicted pedophiles sympathetically. He asked viewers to look past their crimes.

Below are excerpts from that Fox News digital article:

“Child Protection League chair Juli Quist believes “children are the central targets of the raging culture war” currently taking place in America. As a result, content that would have been unthinkable when famed Post editor Ben Bradlee ran the once-prestigious paper in its heyday is now landing in the “Democracy Dies in Darkness” publication alongside legitimate news.

“The Washington Post has become a part of the pipeline. We’re bringing these transformational changes to our culture so that they have become part of the depravity,” Quist told Fox News Digital.”

“They’re minimizing, they’re normalizing the concept of… adults having sex with children,” she continued. “It’s a deliberate attempt to shift sympathy, sympathy from the victim of violence against children to the perpetrator. So that’s very intentional.”

“Marks “thrills over breaking one more sexual taboo,” according to Quist, who believes the review helps normalize behavior that society has long considered despicable.

“It’s a primary tenet of the culture war to break through taboos, especially sexual taboos,” she said. “The whole idea is to break down the culture that we have and the boundaries that have been established, especially to protect children.”

“The thrill of it, is to take what we consider boundaries, normal boundaries of our culture that have existed to protect children and to keep their innocence, and just shove it in people’s faces,” Quist said. “This is a campaign to desensitize the public horror against violating the innocence of children. And The Washington Post has become a player in that campaign, a very aggressive player, and it’s dangerous to children.

Read the full article at Washington Post slammed for ‘normalizing,’ ‘minimizing’ pedophilia: ‘Part of the depravity”.