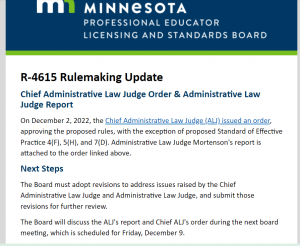 The Administrative Law Judge has reviewed the PELSB public hearing and released his report on the proposed teacher licensing standards.

Judge Mortenson approved all but three of the contentious proposed teacher licensing standards. His ruling made only cosmetic changes to the proposed standards and essentially approved the proposed cultural Marxist structure which will transform teaching in Minnesota.

Judge Mortenson’s ruling now sends the proposed standards back to the Teacher Licensing Board which must either correct the three unapproved standards below or remove them from the rule draft. If they are removed, the remainder of the standards become state law. If they are “corrected,” the corrected version will again go before the Judge.

There are no published opportunities for additional public input. Once these standards become state law, teachers seeking to attain a teaching license in Minnesota will be subject to the new rule requirements. These requirements extend to public, private, and charter schools, Head Start, ECFE and all other areas which require a Minnesota teaching license. At this point, PELSB claims it does not apply to teacher licensing renewals. However, it will eventually apply to license renewals because state law still ties teacher renewals to teacher licensing standards.

The three standards NOT approved:

Following is some of the remaining key objectionable standards that WERE approved:

Many of you, our readers, were among those who weighed in heavily against the proposed Marxist-based Minnesota teacher licensing standards. Because of that unprecedented resistance, and the possibility of a new administration ready to challenge them head on, the judicial review chose to wait out the election.

The results of the November 8th mid-term election left the Minnesota political structure in place. As CPL reported in our election review, there are unanswered ‘anomalies’ which indicate the election results did not reflect the will of the majority of Minnesota voters. The legitimacy of this Minnesota government is in serious question and one reason we do not believe these ‘winners’ represent “the consent of the governed.”

These standards are not embraced nor representative of the people. They are not what families want for their children or their future. They are being forced upon us.

It is incumbent upon us all to stand against them. Here are some thoughts:

Our nation’s founding documents are and have been an inspiration to countries around the globe. They hear about the Declaration of Independence which voices the radical “self-evident” truths that we are “created equal,” that we are “endowed by our Creator with certain unalienable rights; that among these are Life, Liberty, and the pursuit of Happiness; that to secure these rights, governments are instituted among men, deriving their just powers from the consent of the governed…”

Even today, the people of China and Brazil are rising up against the tyranny of their oppression with the words of our founders on their lips. We are not facing tanks; can we have the courage to find ways to resist too?