Top
You are here: Home / CPL Article / 3 Things to Know About the Toolkit

Minnesota’s adoption of the Toolkit to Ensure Safe and Supportive Schools to Transgender and Gender Nonconforming Students on July 19th was a hot topic all over state and national news, talk shows, blogs and social media. What started as a yearlong stealth project within the Minnesota Department of Education (MDE) was busted, no longer under the radar, and it had become a national scandal. Its adoption has set off a firestorm. 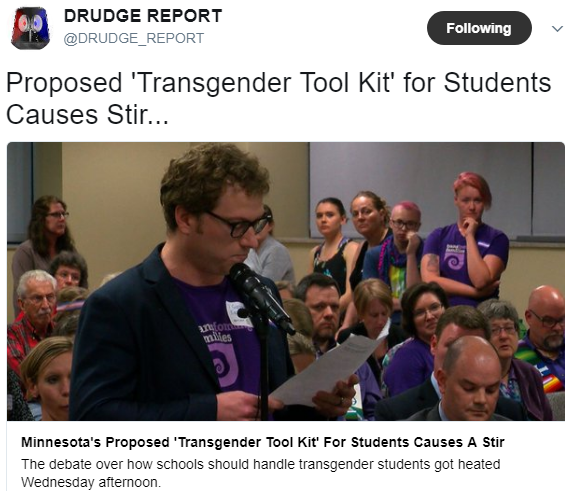 Dave Edwards, pictured above, a Community Organizer import from Chicago and point person in targeting St. Paul Charter Nova Academy for lawsuit over kindergarten gender fluid curriculum, testifies here in support of the Toolkit which he was instrumental in writing. Edwards brutally bullies any who disagree with his gender ideology by calling them “hate groups.”

3 THINGS TO KNOW ABOUT THE TOOLKIT

1. MN School Districts can and must reject the Toolkit’s recommended policies.
The unelected, unaccountable state agency within the Department of Education that adopted this Toolkit (School Safety Technical Assistance Council, SSTAC) has no legal jurisdiction to make policy for your schools. Only your elected school board can do that. Contact your school board members immediately to insist that they do not adopt these policies. They are being subjected to intense intimidation by gender activists who are using excessive bullying and hateful language.

2. It’s not just about bathrooms and locker rooms. It’s about indoctrination into a dangerous gender ideology.
The Toolkit has exposed the “Safe Schools” craze as fraudulent. It has revealed the real “Safe Schools” agenda. That agenda forces all kids to affirm a dangerous gender ideology: that we are only what we feel; that our feelings, based on superficial sex stereotypes, determine our gender; and that gender is a spectrum of options from which we choose.

A few examples from the CPL Key Concerns Regarding Revised Toolkit (PDF):

• Students and parents are considered guilty of bullying, harassment and emotional harm to gender-confused students if they do not support a student’s choice to transition to another gender.

•Teachers are encouraged to go behind the backs of parents when parents are unsupportive of their child’s transition—even suggesting reporting them to civil authorities.

•Students who object to sharing private spaces like bathrooms, showers, locker rooms and hotel rooms with students of the opposite biological sex should be segregated, while gender confused students should never be segregated or made to feel stigmatized.

•Teachers, parents, and students who use the wrong pronouns when addressing a transgender student are threatened with being in violation of civil rights laws.

The stated goal of the Toolkit, to make gender-confused kids safe from suicide, has been exposed as a calculated and manipulative pretense. Instead of helping these vulnerable youth work through confusion, and instead of teaching simple respect for all, children as young as kindergarten are exposed to and thrown into the gender confusion disorder.

In other words, the very essence of who we are—a boy or a girl, a man or a woman—is stolen from children beginning at a very young age and replaced with a hazy, undefinable fog of gender confusion, disconnected from reality.

3. The pronoun mandate is the most dangerous part of the Toolkit. The forced use of preferred pronouns is particularly alarming, because language structures the brain and determines the way we think. Forcing children to use pronouns that they know are not true violates them at the deepest level. Not only does this commanded vocabulary violate their conscience, it manipulates their minds to adopt a false mental framework, frequently setting them at odds with their families and their faith.

The well-known Italian Marxist Antonio Gramsci wrote extensively in the early 1900’s about making revolutionary transformation of a culture through controlling its language. Changing a culture’s way of speaking, he wrote, changes the way people think and breaks up the existing power structure.

Forced use of “preferred pronouns” is nothing short of an act of oppression directed at our kids and our families!

When those in political authority direct people on how they must speak, government has entered the realm of mind manipulation and despotism—a most dangerous power grab over the thoughts and minds of its citizens. We cannot overstate the destructive corrosive influence this has on our culture.

The Toolkit was crafted in secret behind closed doors for almost a year by all the familiar activist groups that have made the SSTAC their pipeline to the kids: OutFront MN, Transforming Families, Transgender Law & Policy Institute, Minnesota Transgender Health Coalition, to name a few. The authors relied on the familiar “gender inclusive” resources, such as AMAZE programs for Racial Diversity and Gender Diversity, Affirming Gender in Elementary School: Social Transitioning, Welcoming Schools, Gender Inclusive School Toolkit, Schools in Transition, and more. With no notice to the public, the Minnesota Department of Education was preparing these recommendations and “Best Practices” for distribution to Minnesota schools. The gender activist groups were demanding that the publication deadline be moved up to assure it would be available to school administrators in time for the new school year.

See CPL articles: The Bullying Bill & It’s Perfectly Normal: The Connection and What is Welcoming Schools and A Critical Review of School in Transition (PDF)

But they didn’t count on the Toolkit being exposed or becoming a national scandal. CPL outed the Toolkit in early May by posting the first draft on our website and then alerting other groups and the public. Suddenly it exploded into controversy. For many, this was their first realization that the “Safe Schools” agenda is false, and they began weighing in. That public outrage forced the SSTAC to post a second draft online for the entire world to see.

The controversy spilled over into the July 19th SSTAC meeting, obliging them to hear two hours of statements from the public before finally adopting the document they were committed to adopting from the beginning. Now, however, they were acting in broad daylight and clearly against the public will.

Destructive forces always mask themselves as angels of light! We shouldn’t be shocked anymore about how far this gender agenda will go. The entire Department of Education is deeply rooted into gender fluid ideology. The Toolkit is just the tip of the iceberg. It’s been in the pipeline since before 2014 when the “Safe and Supportive Minnesota Schools Act,” aka, the “Bullying Bill,” was passed with nice-sounding names: like “Safe Schools” and “Anti-Bullying.”

Thanks to the exposure of the Toolkit, the public knows a lot more today than they did in 2014 about those dishonest words! The Bullying Bill didn’t have public support, either, once it became exposed. But the Bullying Bill passed anyway, because gender activists had the votes to ram it through.

This issue has to be an election issue: for school board members, for legislative races, and for statewide races